I said that Inspiration was my word for the year.  There are many people who inspire me to live a better life.  One of those people is not surprisingly my father.  My Dad is almost 92 years old.  He was born in 1920.  He lived through the depression and World War II.  He is one of the few WWII vets still alive.  He amazes me with his gusto for life.  Even now he still gets out into the world, goes out for lunch with friends, is an active member of various clubs in his community and in general is not only maintaining his quality of life but also contributing to the quality of life of others.  My Dad has been an inspiration to me in many ways but probably one of the greatest gifts he gave me is my love of photography.  My Dad gave me my first camera when I was 13 years old.  An old range finder camera he had from earlier days.  My Dad loved photography all of his life and practiced his passion during WWII on the island of Okinawa.  He had a darkroom there under very precarious circumstances and provided his fellow soldiers with snapshots of themselves that they were able to send home to family members in order to let them know and see that they were alive and o.k.  The story behind those darkroom images is unbelievable.  Anyone that know s about developing film and printing can imagine how difficult it must have been to pull that task off.  But my Dad has always been a ” get it done” kind of guy, something that has followed him even to these late years of his life. 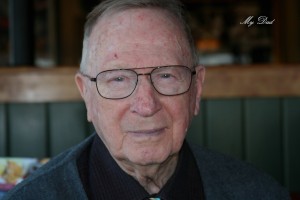 As I was saying, he gave me my first camera when I was 13.  As a result taking pictures has been a part of my life ever since.  I would say that it is one of the things that has defined me.  My life has been full of movement.  I have seen many places in the world.  Wanting to hold onto those places has caused me to record them with my camera.  Looking though the viewfinder has taught me from an early age to look at the world from many perspectives.  To focus on the details of life and to live that one moment, that one place or that one person in an up-close and personal way.  I would have to say that living life with a camera attached to my hand has also taught me a lot about letting go.  With all the moving around that I have done, it is hard to have lots of personal possessions.  Sure I see things in the world that I wish I could have forever but I began taking pictures of those things, places, people and learned that I didn’t really need the things themselves, I just needed to be able to record them so that in the future I could go back to them and re-live the original pleasure they gave me.  Fewer possessions in life means more freedom.  Looking through the lens has taught me to see events and people from all angles.  Above, below, from the side, straight on.  I like to think that this aspect of viewing things from many angles has allowed me to become a more tolerant and compassionate person.

Recently my father has been going through his things and in some way preparing for the inevitable.  I assume that when a person reaches the ripe old age of 92, they in some way realize that their time is limited.  My father, among many other pursuits in life, was a clock collector.  He had an amazing collection of antique clocks.  All kinds, wall clocks, mantle clocks, grandfather clocks, Coo coo  clocks, statuary clocks, pocket watches, etc…   My mother had used them as the central decorating theme in our home and when they were both younger and able to keep the clocks wound, mid-night or noon hour at my home was a thing to behold.  Clocks would be chiming, chirping and bonging from every corner of the house.  Well, recently my father and mother came to the conclusion that it was time to let the clocks go.  They didn’t want us, their children, to have to struggle to know the value and sell each of the clocks.  While my father was preparing the clocks for auction he came across something he had forgotten about….an old photographer’s light meter.  “Wynne’s Infallable Photographic Exposure Meter ”  from 1904. 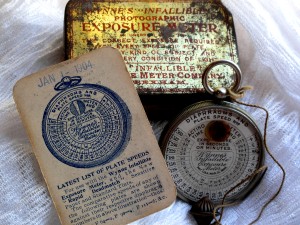 He set it aside.  It would not be going to auction.  He gave it to me.    In recent years I have had to let go of many things.  Possessions, old life styles, my home and even some friendships.   But my Father has seen me through it all.  Stood by me.  Now as a last gesture he has given me something to remember that it was he who first put a camera in my hand and taught me to see the world.   So many lessons I have learned as a result of that passion passed down from father to daughter.  Last night my father asked me if I believed in the power of prayer.  He said he had been praying for God to let him live just a little longer.  He wants to see me through my challenges and difficulties.  I told him that I most definitely believed in the power of prayer.  But I also believe in all that he has already given me.  I know that no matter what, his lessons will see me through whatever comes my way.

I had the opportunity for a spur of the moment road trip.  I had to take my Mom down to southern Illinois to meet up with a friend.  I decided to go a little further south and re-visit one of my  favorite museums.  The National Quilt Museum.  This museum I would qualify in one sentence:  ”  A Feast For The Eyes ”   You do not in any way need to be a quilter, or even interested in quilting to love this museum.  The quilts on exhibit here come from are genres in quilting and can be categorized as works of art.  They are like exquisite paintings in fabric.  The quilt museum displays men and women quilters both as well as quilters from other countries.  The building itself is delightful and if you are interested in quilting you can sign up for one of their many workshops with master quilters to guide you.

The Quilters Museum is not all there is to see in Paducah.  There is a beautiful historic district with many interesting eateries and antique shops. 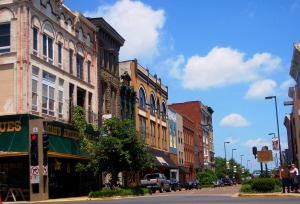 And if there is one thing the city of Paducah knows how to do well it would be the creation of the most astounding and decorated floodwall.  The city of Paducah sits on the banks of the Ohio river, one of the nation’s main water ways. The Ohio river along with rivers like the great Mississippi and the Missouri were the roads for westward travelers in a time when there were no roads.   Like most river towns Paducah lives with the threat of the river overflowing and flooding the historic downtown.  In response to this on-going threat the city has built a floodwall and this floodwall they have decorated with beautiful mural depicting scenes of national interest, technological advancements, scenes of life in a river town and local monuments.  The effect is both astounding and charming all at the same time.  The floodwall is visible both from the National Quilt Museum and from the Historic Downtown.